A growing number of people are becoming passionate about bees and unlike other flying insects, which can be pests, bees are vital to our well being. Bees pollinate a large percentage of what we eat and help sustain our ecosystems and one such person set on helping them out is our very own MD, David Hallam.

After 2 years and several bee-keeping courses, David now has 5 bee hives with around 20,000 bees. The very first crop has managed to produce over 80 jars of honey this spring, which have been on sale in the aptly named staff café, The Hive.

David decided that, instead of making any profit on his two year long project, the proceeds would all go towards the charitable organisation, the World Land Trust. This trust is an international conservation charity that protects the world’s most biologically significant and threatened habitats, including bees. 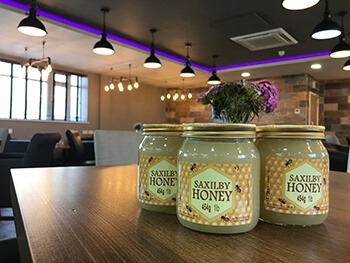 Why this particular honey?

The reason why David’s honey stands out amongst the rest is the fact it has been made locally in Saxilby where the bees will fly up to 3 miles from their hive, pollinating local flowers and orchards. Unlike blended supermarket honey, this honey has gone from the beehive to a jar in just a few hours, so it doesn’t go through any processing and is therefore classed as “raw” honey. It is extracted humanely, with no chemicals, preservatives or added ingredients put into the honey.

Firstly, the honey is collected from their hives in frames containing honeycombs and is then carefully spun to extract the liquid honey in a spinner. The honey then is collected at the bottom of the spinner and is put straight into jars, so the honeycomb can then be given back to the bees to fill up again.

So far, the jars of honey from David’s bees have created quite the BUZZ amongst OrderWise employees, selling around 80 jars for an impressive total of over £320! This is a great contribution to go towards the World Land Trust and we look forward to hearing more about David’s work to save our best pollinators!